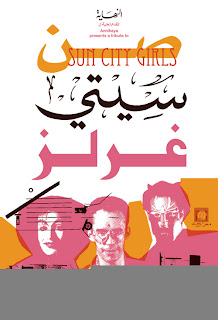 Théatre de Beyrouth is hosting the two half Lebanese brothers Alan and Richard Bishop from the legendary experimental rock group Sun City Girls. The group was founded in 1981 in Arizona. With a style that is hard to categorize, somewhere in the land of experimental rock, that borders with jazz and spoken word; they became the ultimate underground rock group.
Yesterday was the legendary night with the brothers playing old Sun City Girls repertoires and tonight is the night for the brothers to play both their solo projects.
In the same time the label Annihaya is releasing their third album Sun City Girls Gum Arabic, an album of covers of the band’s repertoire.
You can read on their homepage: “Trust NO One! Investigate for yourself. Self-motivate yourself to KNOW (Not BELIEVE). Believing is for idiots. Knowing is everything. How does one KNOW? Figure it out YOURSELF! No one else can tell you or show you how."
I just found myself two mentors Amen / A of Arabia
Upplagd av a of arabia kl. 06:59