Amrad and I, or “we all share fascination over the androgynous” part 1 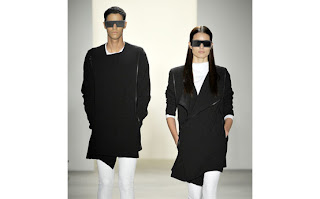 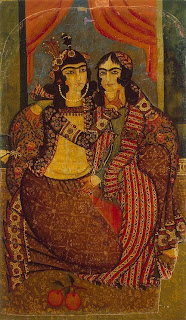 I’m writing an article about Chaza Cherafeddines exhibition “Divine Comedy”, that was exposed September 23rd through October 13th at the Agial Art Gallery in Beirut. The project deals with our “understanding of beauty” and look at the changes in the Islamic art from the 16th and the 18th centuries to the early 20th century . What you can see is a change, in beauty, from a more androgynies state of mind to a more fixed binary system of gender.
Chaza Cherafeddine and I have both read the book “Women With Mustaches and Men Without Beard”, by Afsaneh Najmabadi, that deals with art from the Qajar Iran (1785-1925). So we both had a lot to talk about. One part of the book deals with the changes in the perception of gender by comparing portraits of “amorous couple”, from having almost identical features in the early days to become a more binary fixed perception of gender towards the 20th century. In the early portraits the young couple where both an object of beauty and desire for the male painter, to change to be an exclusive female feature in the later images. Towards the 20th century the woman’s breast became bare to exaggerate her sexuality and the man had a beard and became a man. It seems to Najmabadi that when the modernist project came along during the 19th under pressure of the western power, the more binary and fixed became the gender.
The beardless young man pictured in these paintings are called Amrad or Ghulam, they where the object of beauty, purity and innocence. West has sometimes described this “culture” to be of pedophilia but it was more a matter of admiration then of sexuality. What west seems to forget is its own obsession of androgynous youth in arts and literature from Leonardo Davinci to Thomas Mann .

But with west’s schooling project of the Middle East, the Amrad had to go. It feels like the modernism with its urge to clean up the world there was no time for in betweens: Efficiency please! So the man had to be more a man and the women had to be more a women. But through my research the Amrad or the Ghulam never really disappeared he has been hiding to have a comeback every now and then. It has been adopted by writers and movie directors both in the east and the west, and fiercely loved by the fashion industry in the end of the 20th century. My girlfriend that is fashionista complained in the nineties that “Why do all women have to look like boys on the catwalk, I’m getting to old for this!”
I fell over these pictures when I was browsing the internet. The painting is an old painting from the Qajar Dynasty and the photo is from the Jordanese born Canadian designer Rad Hourani’s latest collection. Well two different versions of an “amorous couple”.
Upplagd av a of arabia kl. 07:22