Me and Mahmoud ”I need a job” 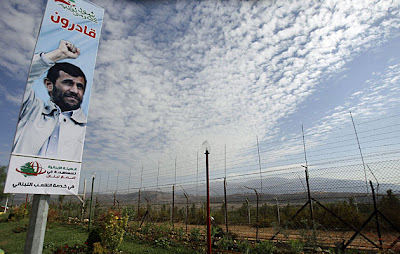 Tomorrow is the day when President “I need a job” is coming to town. I can’t pronounce his last name so I change it; I’m a student in Arabic it’s complicated as it is.
Will there be a war? Will Israel be so provoked so the bombs will fall over southern Lebanon again? Or will it be THE war that’s going to show us who’s in charge? I don’t know? Right now I don’t care. Tomorrow is another day. What I learned through living in a society like Lebanon is we don’t have time to worry about tomorrow. There will always be a risk for a war. Lebanon’s position as an intermediary roll or as the traditional saying goes “Lebanon’s strength lies in its weakness” puts this country always at risk.
Tomorrow is Wednesday and it’s Country and Western night at Speak Easy in Hamra. There is where I will celebrate Mr. President’s arrival. And while the bombs fall I hope that I have time to listen to at least one or two songs by Dolly Parton
Peace A. of Arabia and “I need a job”

Picture from LA Times
Upplagd av a of arabia kl. 07:22